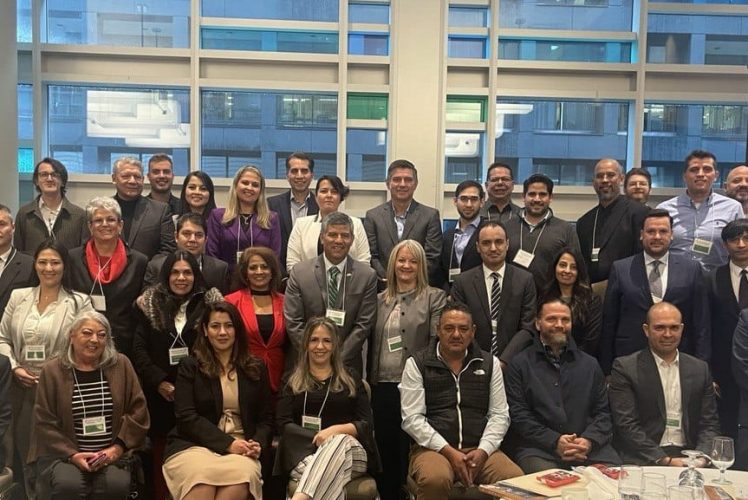 The Trade Mission to Canada organized by CMX Partnerships with the valuable support of private and public sector organizations was held successfully in British Columbia from Oct 24 to 29 thanks to the great participation of Canadian and Mexican businesspeople, leaders and authorities from private and public sector organizations.
On behalf of CMX Partnerships, we want to thank, the participation of the 10 companies that traveled from Mexico to British Columbia, Canada which invested time and efforts to participate in our trade mission.  In this same line, we want to thank the valuable support of the strategic partners of this Initiative namely, the Consulate General of Mexico in Vancouver, the Surrey Board of Trade, the Vancouver, Island Economic Alliance, The South Island Prosperity Partnership, the Foreign Trade Zone, Initiative and the State of the Island Economic Summit. Likewise, we thank our sponsors, community partners and leaders who gave an amazing support and boost to the different activities of the trade mission.
In the next lines, we share with you a brief overview of this e Initiative that we organized to promote further trade, investments and cooperation in economic sectors between Canadian and Mexican companies . We look forward to staying in touch with you and seeing you in the next edition of this event.

The Mexican Trade Mission to Canada, kicked off in Vancouver, British Columbia where the Canada-Mexico Dialogue Event was a key part of the agenda

The Mexican Trade Mission to Canada, kicked off on Monday morning Oct 24 with a series of Business to Business meetings (B2B)  between the visiting Mexican firms and Canadian counterparts in each respective industry. The day was capped off with a warm reception at The Vancouver Club, attended by a number of local leaders, from a wide range of businesses, institutions and organizations and the Mexican delegates.

On Tuesday October 25, the Coast Coal Harbour Hotel in Vancouver played host to the 2022 CMX Dialogue Event. The event kicked off at 9:00AM and ran until 2:00PM. 80+ person crowd enjoyed a variety of interesting speeches and presentations from private and public sector leaders including the Consul General of Mexico in Vancouver,  The BC Minister of Jobs, Economic Recovery and Innovation, Hon. Ravi Kahlon,  representatives from Export Development Canada, Pacific Economic Development Canada among other leading private and public organizations. The Canada-Mexico Dialogue in Vancouver brought together Canadian and Mexican leaders and organizations to discuss how to build capacity together.

The second stop of the Mexican Businesspeople was Nanaimo, BC. There, they presented their companies to local leaders and businesspeople attending the prestigious Economic Summit

Having arrived in Nanaimo the night before, the Mexican delegation had an early start at the 16th Annual Vancouver Island Economic Summit. The morning was spent listening to presentations from each of the Mexican business leaders, including a fun and engaging discussion around the popular Delbueno Tequila. The morning event was also graced by local leaders including authorities and leaders ff the Port Alberni Port Authority,  Innovation Island Technology Association an of the Pacific Seaweed Industry Association.

The rest of the event was spent networking with businesspeople from around British Columbia, enjoying the wonderful program and listening to some fascinating keynote speakers.

After leaving Nanaimo, the Mexican Business Delegation stopped for a quick pit stop for a wine tasting at one of the local Wineries

The third and last stop was Victoria, BC. There the Mexican Delegates participated in different business gatherings and in a business workshop designed specially for them

The first day in Victoria, BC on Oct 27th, the Mexican Business Delegation spent the evening at a wonderful business reception in their honour at the offices of one of the sponsors of the Trade Mission and enjoyed speeches, networking and a lot of laughs.

On Friday, October 28, the delegation stepped out into the beautiful Victoria sunshine and travelled over to Royal Roads University (RRU) where the Mexican leaders were amazed at the sheer beauty of Hatley Castle and the surrounding forests. There, the Delegation enjoyed an informative workshop on Doing Business in Canada, with honoured guests included the elect Mayor of the City of Colwood, a former Canadian ambassador, a successful local entrepreneur and the Vice President Research and International of the University.

After a guided tour of the RRU campus, the Mexican delegates took the afternoon to explore the city before reconvening at a nice and traditional pub of Victoria, BC for a final business networking event and wrap-up of their adventure. Many local business leaders and local leaders attended the casual gathering while sharing their stories and their business cards.

Our most heartfelt thanks

Thank you to all the Canadian and Mexican businesspeople, leaders and authorities who supported and participated in the Trade Mission Event.  Thank you to strategic partners, sponsors, community leaders and the amazing Mexican community and businesspeople in British Columbia who gave us the support needed to make this a reality.

We invite you to watch the video below which summarizes some moments of the Trade Mission initiative. This high-profile project had the aim of promoting business connections and fostering business opportunities to the benefit of Mexican and Canadian companies.

We look forward to  seeing you in the next edition of this event.